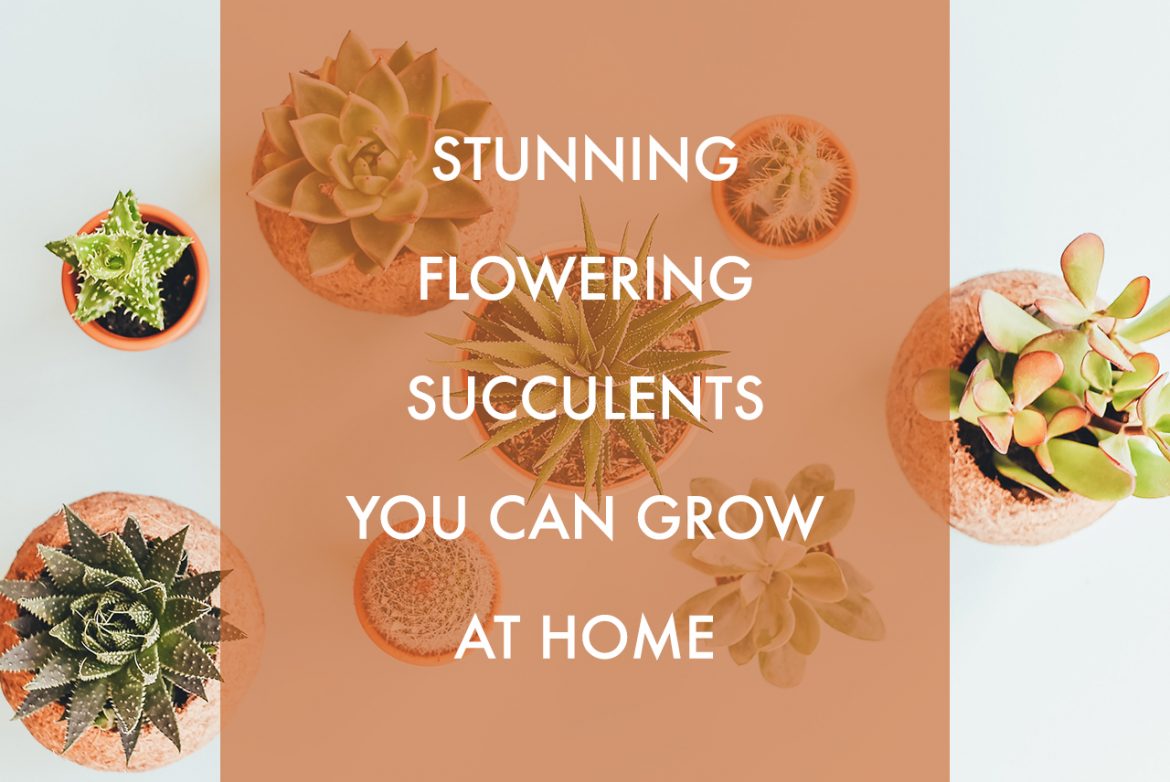 Is your green thumb a little unsteady? Do you tend to be what Birds and Blooms calls a “forgetful gardener”? Or do you want a houseplant that will brighten your home without you expending a lot of effort to care for it? If any of these things apply, you may want to consider a flowering succulent.

“Succulent” is a word of early 17th-century origin, from the Latin succus, or “juice.” Succulent plants store their juice – that is to say, water – in their corpulent leaves and stems. This means they don’t need a lot of persistent watering, and in many cases, you can allow the soil to dry out between soakings. If you’re looking for an easy-to-maintain houseplant that will produce blooms, consider one of these eight flowering succulents.

Sunset calls Echeveria “the crown jewel of the rosette-forming succulents.” Native to semi-desert areas of Mexico and Central America, as well as the northwestern part of South America, Echeveria’s short stalks give birth to flowers, and the plant’s leaves are brightly colored. This beautiful plant is like a work of art, and so it is not surprising that it takes its name from Atanasio Echeverria y Godoy, a 19th century Mexican botanical artist.

Unlike many plants in its genus, the flowers of this succulent bear free petals that are divided into half a dozen or a dozen sections. Among the many houseplants in this category, three have been honored by the Royal Horticultural Society with its prestigious “award of merit”: Blushing Beauty, Sunburst, and Zwarktop. Aeoniums primarily hail from the Canary Islands, Morocco, Ethiopia, Kenya, and Yemen, although some have been introduced in California. The blooms vary by species and can range in color from bright yellow to pinkish red.

Schlumbergera plants are native to the coastal mountains in the Southeastern region of Brazil. They are called “May flower” (or Flor de Maio) in Brazil because that’s when they flower in the southern hemisphere. However, in the U.S., houseplants of this genus take their common name from the season when they flower, and are called the “Christmas cactus,” “Thanksgiving cactus,” or “holiday cactus.” In the wild, they grow on trees or rocks, but also flourish when potted for indoor planting. The Christmas cactus gives birth to bright red blooms in winter.

Formally called Rhipsalidopsis, the “Easter cactus” or “spring cactus” flowers in the spring, typically from March to May, when it gives bloom to star-shaped flowers that open with the rising sun and close at sunset. The blooms, which vary in color from orange to red, can last several weeks. In their native land of Brazil, these plants grow toward the tops of trees. They can flourish even in dry conditions and partial sun and can be repotted once flowering has finished.

Native to South Africa, Senecio radicans, or “String of Bananas,” is a trailing succulent that earns its name from its tendrils of small, glossy, banana-shaped foliage. The plant’s partially translucent, pointed leaves grow on cascading stems. It blooms with clusters of little lavender, yellow, and white flowers in the winter and fall, which smell a bit like sweet cinnamon. A fan of filtered sunlight, this plant needs good drainage and watering only when the soil is dry to the touch.

More commonly known as either “donkey’s tail” or “burro’s tail,” this succulent can be found in its natural habitat in southern Mexico and Honduras. Although it rarely blooms, it earns a spot on this list because when it does, in the summer, its star-shaped flowers are spectacular. They appear in bright red or pink clusters of one to six flowers and have vibrant yellow stamens with softer pink sepals. Best planted in a hanging basket, Sedum morganianum prefers bright sunlight, and the soil should be kept somewhat dry during the winter months.

Euphorbia milli has spiky branches that recall the crown of thorns placed on Jesus at his Crucifixion and is thus is commonly called “crown of thorns.” Native to Madagascar, and introduced to France by Baron Milius, this succulent is now a popular flowering houseplant in the United States. While its flowers are so tiny that they are difficult to notice in and of themselves, the brilliant hues of the yellow and red bracts bring color to any room. The length of its flowering season makes this plant worthy of a spot on this list of flowering succulents.

According to Wikipedia, Kalanchoe blossfeldiana is primarily native to tropical Africa. Popularly known as “Widow’s Thrill,” the flowers of this succulent are divided into four sections with eight stamens. The petals of the flowers are welded together into a tube-like structure. The plant blooms late in the fall or early in the winter, giving rise to orange, gold, white, pink, or dark red flowers.