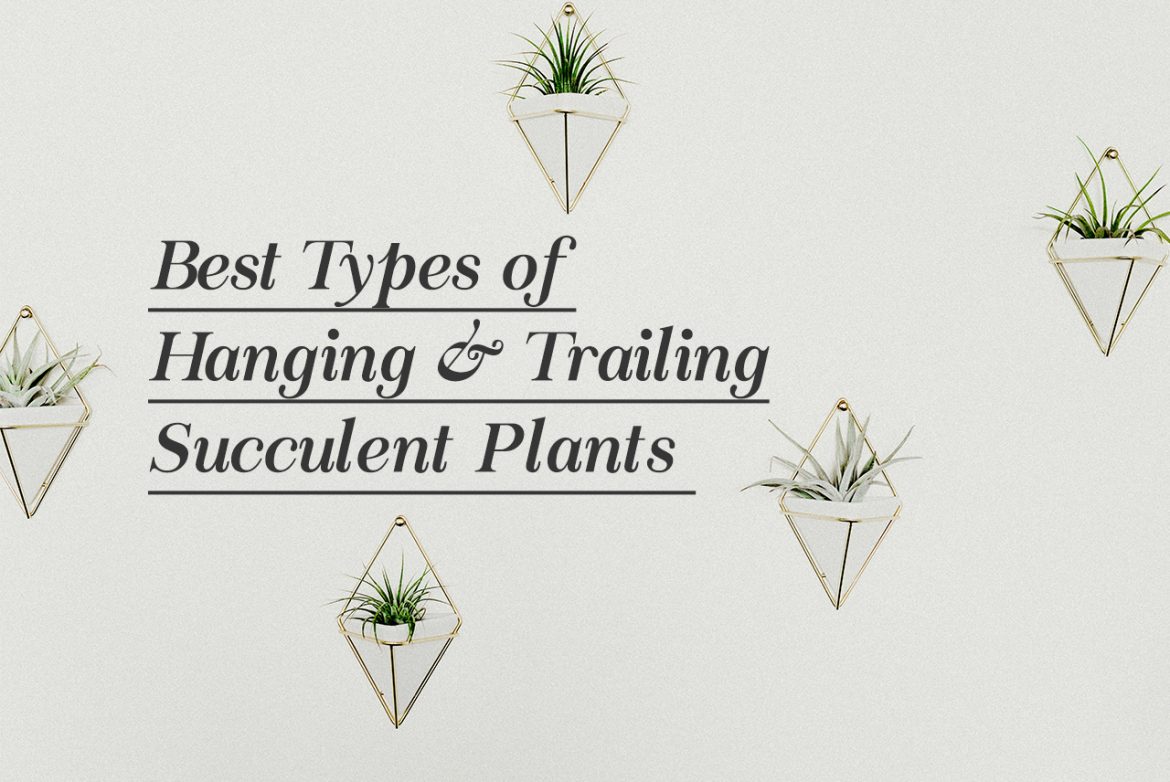 Succulent plants, or succulents, feature fleshy, thickened stems or leaves that function to retain water in arid soil and climates. According to Dictionary.com, their name derives from the Latin succulentus, which means “having juice,” and it is related to the Old English sucan, “to suck.” Succulent is a fitting description given that these plants “suck up” and retain water.

Succulents make especially excellent house plants. There are a wide variety of succulent plants available to the home gardener, but among the most popular types are hanging and trailing plants. These plants will liven up any room, but they boast several other advantages as well:

Here are five of the best hanging and trailing succulent plants:

Also known as “rosary vine,” this plant is formally called Cereopegia Woodii, or C. Woodii. However, this succulent plant earns its most popular name, “string of hearts,” because its variegated leaves sometimes look like little hearts. The plant gives bloom to tiny, magenta flowers and, over time, the trailing vines may also bear tubers. Though native to Zimbabwe, South Africa, and Swaziland, string of hearts is a popular houseplant in America. Good drainage is important for this plant, and water should never be allowed to collect in the basket. Water only when dry and hang string of hearts in full sun.

If you prefer a creeping plant, consider Othonna capensis, or ragwort vine. A member of the daisy family, this plant’s willowy, trailing stems can grow several feet long. Ragwort vine is native to South Africa, and if you give this plant plenty of sun, its yellow blooms will open.

According to Wikipedia, Senecio rowleyanus was named for Gordon Douglas Rowley, a British botanist with a specialty in succulents. The plant is more commonly called “string of pearls” and is native to the southwest regions of Africa, where it appears as a dense mat. Also called “string of beads,” the plant is colloquially named for the appearance of its leaves, which resemble small beads or pearls. In bloom, the small white flowers of the plant tickle the nose with a scent of cinnamon. String of pearls requires full sun but little water.

Native to Madagascar, Africa, and southern Asia, Sanseveria is a genus of some seventy different plants. Among them, Sansevieria Parva is a hanging cactus with bright green, lance-shaped foliage that grows up to half a foot long and gives bloom to pinkish-white flowers. Like most hanging succulents, it requires full sun and only moderate watering.

Native to Honduras and southern Mexico, burro’s tail (or donkey tail) is officially called sedum morganianum. The pendant stems of this plant can spill down over its basket for up to four feet, and they are light green in color. In the summertime, the tips of these stems will give bloom to red and pink flowers, and the entire plant is coated with silver-blue blooms.

Be careful not to over-water, particularly in the dormant winter months. The growth period of spring and summer is a time for even, regular watering. Burro’s tail should be hung in full sun, such as in front of a window, so that its leaves may achieve their full deepness of color. If you’re looking for a plant similar to burro’s tail but with larger, stronger leaves that are less likely to drop when touched, lamb’s tail might be the right choice for you.